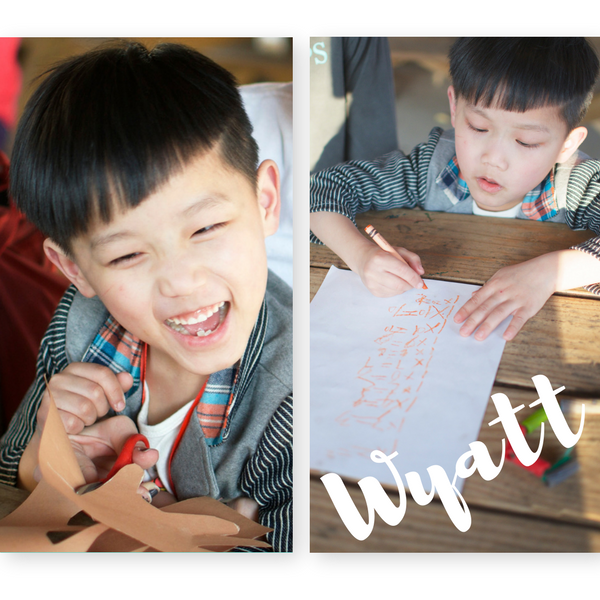 Wyatt is described as an active little boy. He always likes to play with his friends and is fond of playing with all kinds of toys–such as, cars, planes, blocks, etc. Even if Wyatt found a stick outside, he uses his imagination and it becomes a fancy toy to him! Wyatt likes watching cartoons on TV and is fond of listening to music. He loves to eat sweet food, such as candy and biscuits, but it is also said that he’ll eat crisps and nuts. Wyatt is such an adorable little boy! 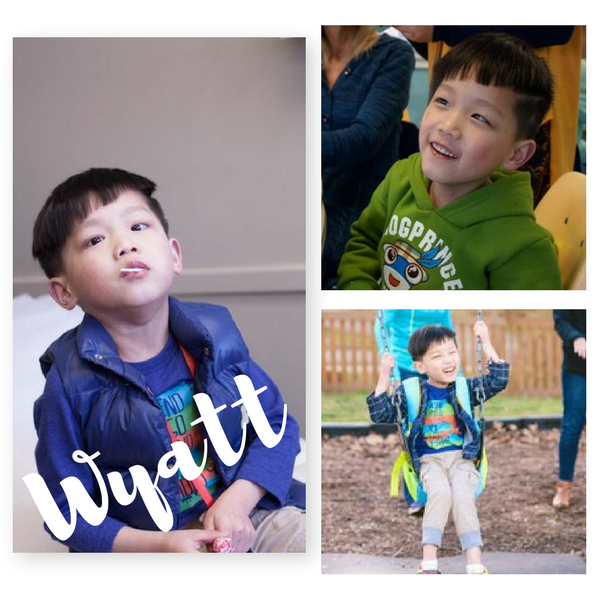 Wyatt attended Lifeline’s Kids Camp in March 2017. Volunteers who met Wyatt shared the following about him:

“let me just say, this little guy is just completely and absolutely beyond precious!! He shared his little snack bag with me, splitting everything exactly in half. He even bit the gummy bears in two! He’s sweet and funny and just a joy!”

“Wyatt absolutely stole my heart. I just have to lead with that so I can move past to my observations of his character. I did not get to know him well my first day because he spent pretty much all his time glued to the coloring books. Later in the week, I learned through his fits of giggles that Wyatt is a determined and often mischievous little boy—in the best way! Admittedly, he finds it easy to follow suit when older kids misbehave, but as with the older kids, I believe that under the surface this is a cry for the individual attention he has lacked growing up. Wyatt has cerebral palsy, but I was impressed with how little it affects his activity. Sure, he had a few falls when he got to running and his little feet got carried away, but that is the case with even the healthiest of boys. When Wyatt got it in his head to do something, he was dead set on seeing it through. As a result, I spent much of my time chasing after that giggling boy when he set off to the abandoned playground, but I did so happily. With his sweet smile and the way he loves with abandon, I guarantee this kid will steal your heart, too!”

Here is a video talking about what he liked about camp. His little voice is SO cute!! (password: kidscamp)

“Wyatt is a fun-loving little boy with lots of energy and a big heart. He has 3 levels- coloring, being held, or on-the-go! The only time Wyatt would sit still was in the arms of one of his favorite volunteers or if he was in front of a coloring book. Other than that he was running, jumping, giggling and playing. His CP never slowed him down. He is a ball of fun with a big smile. I enjoyed getting to know him and know that he will be a blessing to any family.”

“Wyatt is a cutie! He is such a sweet little boy and a big help. He loved helping put the toys back where they belonged.  Wyatt offered me some of his snacks that he kept in his backpack.  He is so generous and is always thinking of others.  He also just loves to sit in your lap and be loved on.  You wouldn’t know that he has cerebral palsy with the way he runs around everywhere.”

Here is a video of Wyatt (with Samuel) sitting, being patient, and waving. (password: kidscamp)

“March kid’s camp truly impacted my heart in a way that is hard to express. Spending time knowing and loving on these precious children didn’t take much time at all for unique personalities of each one began to surface. My short time with this this fellow quickly grabbed my heart as his truly unique personality began to gleam. Wyatt is slightly shy (at first) and wise beyond his age. It doesn’t take long to come to the realization that communicating in the same language is not needed to deeply connect and communicate with him. He is extremely attentive to detail, loves to meticulously color pictures, solve multiplication and simply sit in your lap for hours on end eating tasty snacks.”

Here is a video of Wyatt at mealtime. (password: kidscamp)

Here is a video of Wyatt doing some multiplication facts. (password: kidscamp)

“During the hours spent with Wyatt perched in my lap during kids camp, he would every so often check to make sure I was very attentively paying attention with a pat on the hand and a quick glanced up smile and giggle.  He’ll make you smile until your cheeks hurt and maybe teach you something about multiplication in the process. Wyatt is truly a special child and I am honored to have had the time to know him face to face during our March Kids Camp. Please continue to lift him up as the Father directs his path and prepares the family He has uniquely provided for him to grow within.”

If you would like to know more about how to adopt this sweet boy, please send me an e-mail – Jessica