Stellan has a family!

please consider donating toward his adoption fees at Reece’s Rainbow. Thank you!

HIS SPECIAL NEEDS
Stellan’s file lists malformation of vertebral column as his special need, but it has been determined that he has Morquio (MPS)

HIS PERSONALITY
Stellan is a model student who loves not only language, but acting as well! He loves to draw, write, sing, and dance. He’s described as polite, respectful, outgoing, active, positive, and brave. Stellan is a great kid who leaves a strong impression on those who meet him.

THOUGHTS ON STELLAN BY THOSE WHO HAVE MET HIM

One visitor said
“Stellan is a very special little boy I had the opportunity to meet this past spring. He has been in orphanage care all his life and yet at 13 years old, he is still waiting. He will age out in April of next year if a family doesn’t move forward soon. I was told he can transfer to his wheelchair independently and can walk for a bit with a walker and even join dance performances with his class for short amounts of time. When I met him, he was shy and polite and had a beautiful timid smile. A girl in his class started to sing and he joined in. When he finished he said he wasn’t as good as singing as she was and I told him he should do something he enjoyed and was good at. He chose to recite poetry for me. When I asked what he liked, he said he liked to read and when I asked what he didn’t like he said math. Things are not accessible in China for someone with mobility issues and his future does not look good if he doesn’t find a family. He was really sweet and appropriately shy around strangers, but with some encouragement he showed me his art and homework and he was so proud. In his class, there was an older girl matched with a family and he was so genuinely happy for her. There was also a boy who had aged out and the contrast was heartbreaking.”

A traveling mom who met Stellan said
“I met this fella in December of 2017. He is an absolute gem! Our new daughter, Clara, kept getting in his space and trying to push his chair. He really took her behavior in stride and was so patient and pleasant. There was just something so precious about him.”

Another traveling family met him when they recently adopted their aging out daughter (that’s where the photo of him touching the man’s leg came from) and they said:
“We met this sweet boy! Love his personality! He joked a lot with my husband and was very comfortable around our family.” 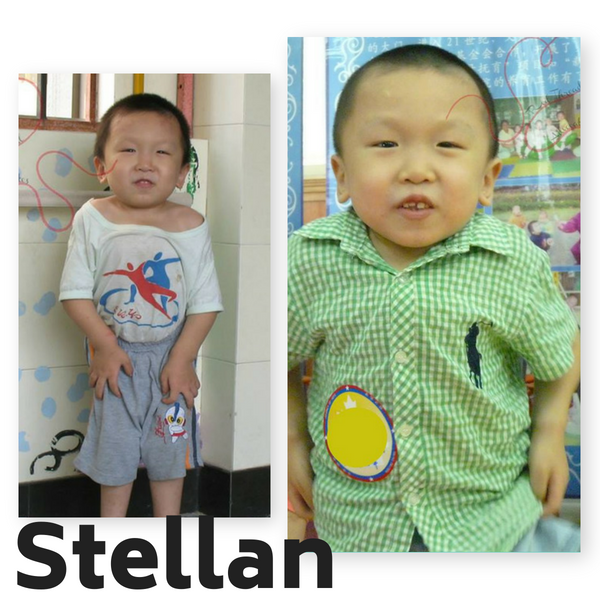