9 year old Ryan was “Angus” with Madison Adoption Associates. They have a $2,000 grant available to help with his adoption. 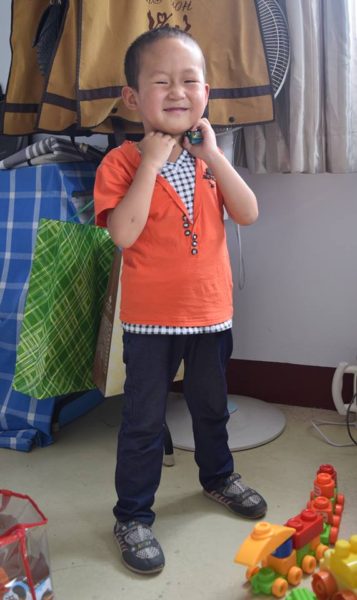 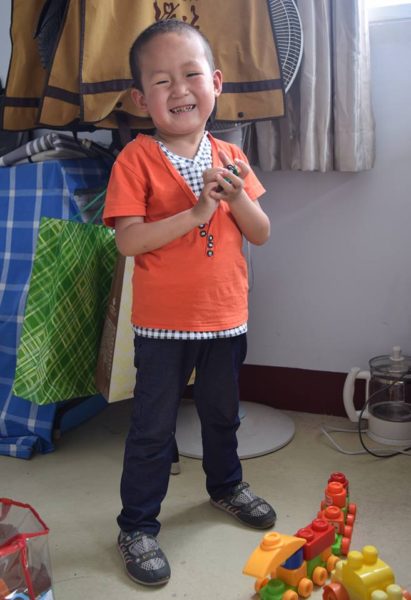 June 2016 Written Update
-How is his mental ability compared to peers the same age? He is slow compared to peers the same age.
-How does his special need affect his health? It doesn’t.
-Is he potty trained? Yes, he uses the toilet, but cannot squat for too long by himself when having a bowel movement.
-Please describe his personality in details? He is introverted, and smiley.
-Is he well behaved and obedient? He is well behaved and obedient.
-How are his gross motor skills? Can he walk, run, jump, and walk upstairs and downstairs by himself? Can he kick a ball? Can he pick up a ball? Any limited functions? He can do all these, but is a little slower compared to his peers. When the ground is not flat, he will hold the hand of an adult when walking.
-How are his fine motor skills? Can he draw nor scribble on paper? Can he pick up little things with his fingers?
He can write from 1 to 10, can scribble, and can pick up tiny things with his fingers. He has no fine motor limitations.
-Is he in any kind of school? If so, what school? Can he catch up in school? He is in middle class in a public kindergarten since April of 2016. He is behind normal peers the same age.
-How is his emotional development? Is the child attached to anyone? Who is he close to? Does he care for other people? He is very close to his foster mother and attached to her. He cares for others.
-How are his social skills? Does he get along well with other children and adults? His social skills are very good. He gets along well with other people.
-Is he under foster care or living in the orphanage? If foster, when did he enter the foster home? How does he do there? Has it been the same foster home all the time? He lives in the same foster family since Nov. 2013.
-How is the language ability of the child? What can he say? Can he speak one word, two words, or sentences ? Can he express his needs well? Is his language ability the same as peers the same age? He can say words and sentences and can express his needs clearly. His language development is the same as normal kids the same age.
-Can the child follow directions of adults? Yes.
Anything else you think the family should know about the child? He cannot walk too fast- he needs to hold hands if the ground is not flat or he may fall down easily. He needs a baby toilet for bowel movements because it’s hard for him to squat down for too long. His mental development is a little slow compared to normal kids the same age.
-Is the child on any medication? No.
-Updated measurements: Height:105 cm, Weight: 19.3 kg, Head: 52 cm, Chest: 57 cm, Foot: 17 cm, Teeth: 20

“Ryan, age 5, is a sweet, shy little boy. He was abandoned outside a hospital when he was about 12 months old.  Shortly after coming into orphanage care, he had surgery for a meningocele and also had a shunt placed to decrease the pressure in his head caused by hydrocephalus. The procedures were successful and he has recovered well. Ryan has good bowel and bladder control and his latest medical report says he’s healthy now.

We visited Ryan in his orphanage in late June and were taken in by his shy smile.  He enjoyed playing with our iPad.  Ryan demonstrated his excellent walking and running, and sang us a song.  His video will melt your heart.

Ryan lives with a foster family.  He sleeps with his foster mother and is very attached to her.  Ryan is described as introverted and not very talkative.  His motor and speech development are a bit delayed.” 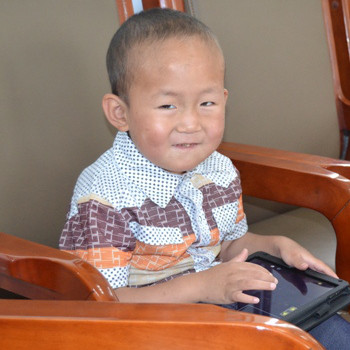 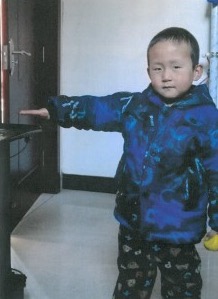 And he’s just adorable in his videos!

Update when he was 4 years old

4 yr old Ryan lives with a foster family and enjoys listening to music, playing with toys, and playing outside. He was born in September 2010. He was born with spina bifida and hydrocephalus. He had corrective surgery upon admission to the orphanage when he was an infant. He has no problems with bowel or bladder control and is doing well overall. It has been reported that Ryan walks, runs, and climbs stairs well.

If you would like to know more about how to adopt Ryan, you can also send me an e-mail – Jessica