Lola has a Family!! 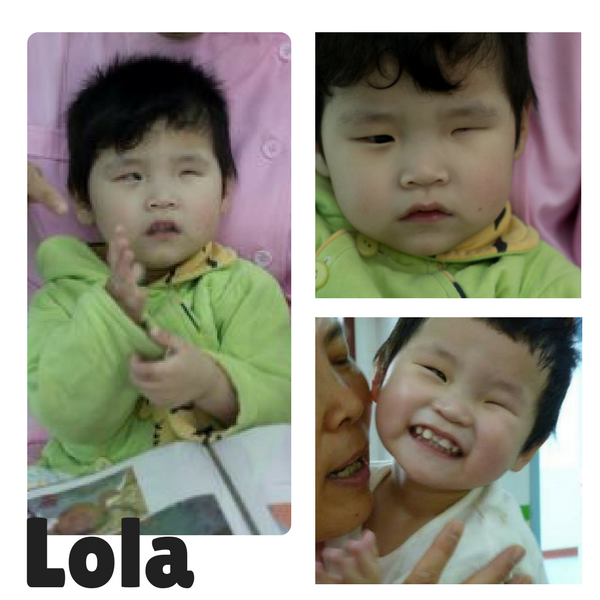 April 2016 report (a visit from agency staff)
“Lola lives in an orphanage that appears to be understaffed and as a result the children don’t receive any rehabilitative services, therapies or education, and spend most of their time confined to their cribs. Agency staff who met Lola described her as a quiet little girl who was fairly reserved.

Although she is blind, doctors who met her say she could sense light a little. Lola didn’t desire to engage with agency staff and laid on the floor rolling back and forth.  The nannies reported that she is capable of standing but doesn’t like it.  When they bathe her they put her hand in the water first and then she doesn’t get upset when they put her in the bath. Caregivers reported that she spends most of her time in her crib because she seems scared if they take her out.  She didn’t play with toys but would feed herself a bottle.  At this time she wasn’t speaking – just babbling.”

March 2016 report (just turned 3 years old)
An update reported that she was able to roll over and sit on her own but wasn’t standing or walking. Compared to other children she was developmentally delayed and her personality was described as introverted.

Sadly it isn’t uncommon for children who are visually impaired to be left in their cribs most of the day so they don’t get hurt.  This neglect leaves many children severely delayed.  It is unknown if Lola will be able to catch up to her peers.

– fairly introverted and fond of quietness
– likes to be cuddled by her favorite nanny and satisfied when being held
– When she cries she can be quieted by a bottle
– delayed development compared to peers
– not speaking, rolling over or crawling
– Could sit and play alone in her stroller
– Enjoys listening to music; sometimes would wiggle her body when music is played
– Her favorite toy is her bottle.