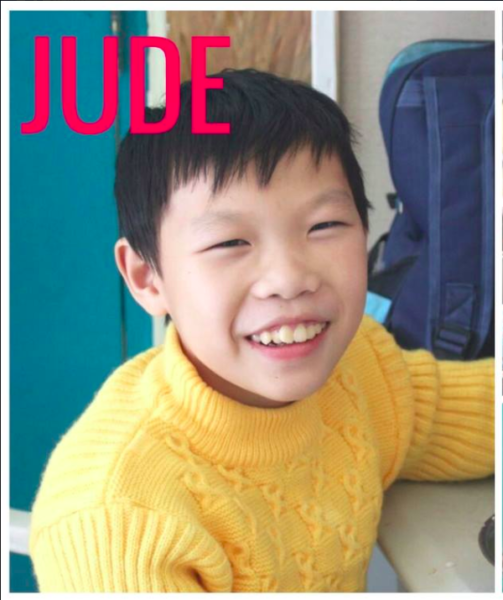 Jude promises “he will be a good man”
Jude wants to have a family for 100 years
Jude HOPES to find his family, but fears he won’t

Watch this VIDEO OF JUDE in 2016 getting dressed, making his bed, eating, in therapy, and singing!

“Jude is adjusting to his new foster home. His foster parents took him to walk around and shopping and got a few new clothes for him. He seems very happy with his new clothes.
The therapist valued his physical condition on April 1, and set up his short to middle period therapy plan.
He goes to school by school bus this week. He got new books and made new friends”
Besides, he got two hour psychological treatment for his carsick. He is fine to take bus now. I went to pick up Jude in the early morning of March 31. Then I took him to Beijing hospital to have physical exam taken. He was taken to his new foster home after we got his medical report in the late afternoon of March 31. I mean, Jude and I spent almost one day. He is such a sweet boy! At the beginning, he was not happy to leave Abba’s house because he didn’t want to leave his best friend ______. ______ taught him a lot, such as to be good and strong man, learnt some stories of popular movies, be nice to the ladies,….He was also worried if he can go to school, make new friends, he worried if he can get therapy for his legs…The most important is to go to school to learn more! He loves to learn! When we both were in the hospital waiting for his medical exam report, he tried to tell me all what he knew from the pictures and info on the wall, if he didn’t know, he would ask me to learn it; he was very curious, he would like me to take him around to see the hospital; when he saw the kids, he would like to share his seats, his foods, when he was the elderly, he would call them: Grandma, Grandpa,…He told me that he loves to have a family, he loves to have a Daddy and Ma Ma and siblings, but he felt very disappointed about his legs, he wish he can run, he can fly, he has 7 dream…First, he wants to be chef, second, astronaut, third, ride bicycles or motorcycles; Fourth, runner; Fifth,…When he saw the intern doctors, he said his Seventh dream was doctor…When we talked about adoption, he asked me why he had no hope after his 14th birthday? He was very sad and said, ” I was told that I was too old to be adopted. After 14, I had to return back to the orphanage, it means I can’t have a family forever, right? Could you help me to find a family? I can do many things, such as clean the table, wash the dishes, take care of younger kids…If I have a family, may I stay with them until I am 100 years old? or 200 years old?” 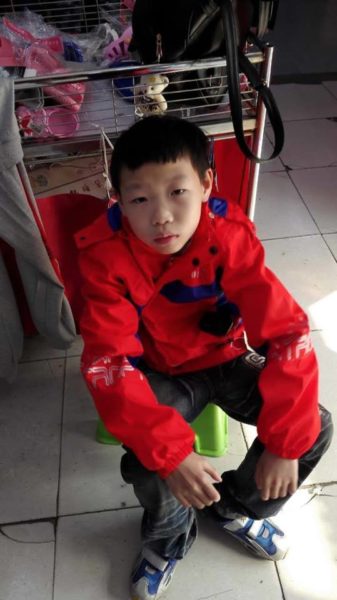 “I took him to have lunch at a local restaurant nearby, he was worried if the restaurant allows him to get in because of his legs, same question when I took him to the local shop to buy his favorite foods. He told me that he will buy new clothes and foods for me when he grow up someday. He told me that he doesn’t want me to spend too much money for him, he just needs one steamed bun which is very very cheap for his lunch…When we ordered dumplings, he was so happy and ate a lot! He also wanted me to tell one waitress if he could invite her to have lunch together with us because everybody eats but waitress. When he ate, he felt sad for her…That waitress smiled to him all the time!”

“He told me that when he was in the foster home before, he liked one girl  called _______ who was 2 years younger than him. She was adopted and living with her family in USA. He told me that he wants to see her someday. He wants to marry her as well! but he sighed and felt very sad for himself. I told him that we are trying very hard to find a family for him. He smiled and told me that he will try very hard to be a “very good man”.