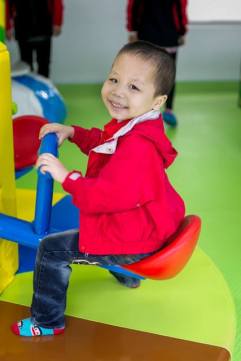 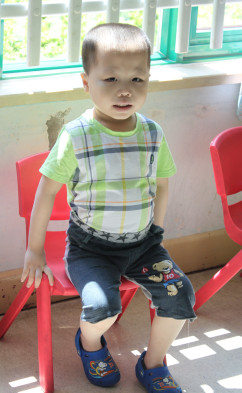 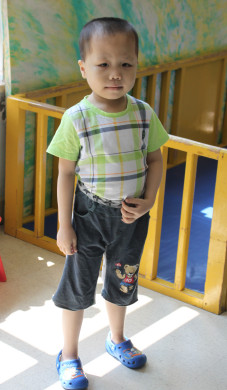 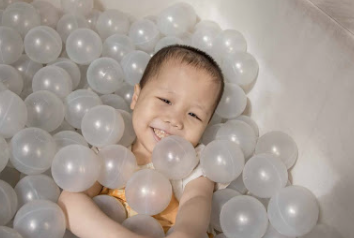 April 11, 2016 update from someone who visited his orphanage
“I spent the day with him today and let me tell you- he is such a great kid!!! He’s sweet and smart. I watched him put together a Lego car following directions all by himself. His mama & baba are gonna be lucky parents!!!”

October 2015 report
“Freddie is very smart; active, cheerful, not afraid of strangers, and polite; he likes to play blocks; likes cartoon Super Pig and Ultraman; likes to play games with adults such as hide and seek; he is attentive when listening to stories; he will help the caretaker with things he is capable of doing.

Freddie can walk and run steadily; can go up and down stairs by himself; can stand for 5 seconds on one foot; can catch and kick small rubber ball; can draw body parts such as eyes, ears and mouth; can play slide; can hold pen by right hand to write numbers 1, 2, 3; know how to read watch; can tell approximate time; know 10 colors such as red, yellow, pink and green; can play coloring for over 10 minutes; can put pen back after using; can play puzzle with over 20 pieces without help; know square, circle, triangle; can distinguish left side and right side; know to use right hand to write; know from Monday to Sunday; knows four seasons.

Freddie has clear pronunciation; can speak sentences with 5-10 words; understand adult’s words; can communicate freely; not afraid of strangers; will not be shy if you ask him to sing and dance and will immediately dance Little Apple for you; can seriously answer questions such as which group do you live in; good interaction with peers; will share toys with peers; can call names of all children in his group; now he studies at kindergarten in our institute; he is learning calculation, music, fine arts, common sense; know animals such as lion, tiger, panda; can smoothly count from 1-100; can do addition within 5; he has learned to sing Edelweiss, Jasmine Flower and Painter; good performance at class; good logic thinking and expressing ability.

Overall, Freddie is a smart and adorable little boy. We hope the baby will be accepted by a family and he will have loving family who will accompany him growing up healthily and happily.”

Gil was born in January 2009 and found abandoned in a hospital when he was 18 months old.  He has been diagnosed with severe Thalassemia.  He is receiving regular blood transfusions, however, agency reps who have met him and followed his care say his treatment is not sufficient and the ramifications of his disease are progressing.  He needs a committed family urgently!!

and here is a blog post with Gil in it!

Upon admission into the institute it was noted that his development at that time was poor and he was very weak.  He couldn’t sit, crawl or stand.  This little guy has come a very long way since his initial examination!  At the time of his report he was 6 years old and was  able to drink from a glass, feed himself, dress and undress himself and was fully potty trained.  He was said to be very smart, active, cheerful and polite.  He enjoyed playing games with adults, listened well during stories and helped his caretaker when able.  He can walk, run and go up and down stairs by himself.  He holds a pen to draw and can write numbers, read a watch, knows his colors, right and left, and puts puzzles together without help.  Gil has clear pronunciation when he speaks and communicates freely.  He shares toys with peers and attends school within his institute to learn math, music, art and common sense. He is said to be a smart and sensible boy and his caretakers hope he will be adopted by a loving family.

Agency reps who have met and advocated for Gil have said, “Gil may be a little guy, at 7 years old he stands about 3 ½ feet tall, but his personality is mighty. Somehow he manages to simultaneously be calm and rowdy, silly and serious, shy and outgoing. One minute he is fully engrossed in the picture he is coloring, the next he is flopping around in the ball pit. One minute he is hamming it up for pictures—tilting his head to the side, flashing the peace sign, and grinning ear to ear—the next he is on the floor intently doing a puzzle. And during it all, he just has this endearing nature. His sweetness draws you in.